NHADA is excited to again sponsor the NHMRO's 40th annual Joanne Packard Toy Run, a fundraiser that makes sure no kid goes without toys at Christmas.

In 2018 the New Hampshire Motorcyclists Rights Organization renamed its annual Toy Run in memory of Joanne Packard who helped start the event and ran it for decades.

“We just felt it was the right thing to do because she was so instrumental in starting it and making it what it has become,” said Traci Beaurivage, NHMRO president.

The move had wide support from anyone who knew Packard, whose husband, Sherm, was a founding member of the NHMRO. He was touched to learn of the gesture. 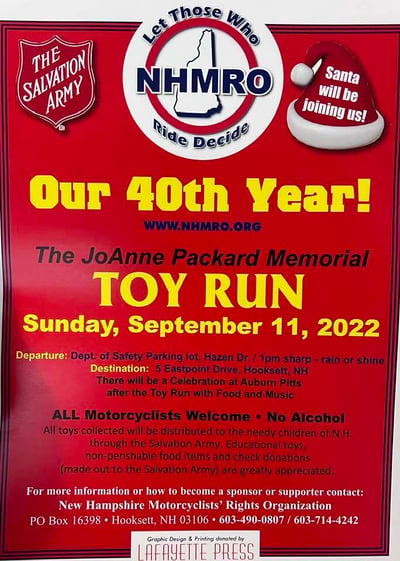 Although he gets the credit, Packard said Joanne was also instrumental in establishing the NHMRO; she got the idea for the toy run after hearing of similar events in other states.

“It started a little bit small, but then it blossomed into a major event every year in the state of New Hampshire,” Packard said.

In years when the weather has cooperated, Packard said as many as 1,000 bikers would take part in the toy run, each of them toting stuffed animals, board games, or other gifts for kids that would be given to the Salvation  Army when the ride ended in the Union Leader parking lot.

“I know it’s been a major help to the Salvation Army and their toy drive,”  Packard said. “We’ve collected a lot of toys over the years for kids in need in the state of New Hampshire.”